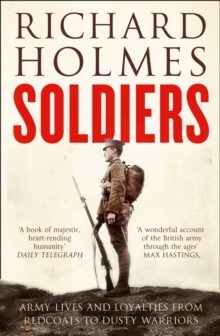 Soldiers : army lives and loyalties from redcoats to dusty warriors

From the redcoat who served Charles II to the modern, camouflage-clad guard at Camp Bastion, from battlefield to barrack-room, this is a magisterial social history of the British soldier. Since 1660 the army has evolved and adapted, but the social organisation of the men has changed less, with the major combat arms retaining many of the characteristics familiar to those who fought at Blenheim, Waterloo and the Somme.

The Duke of Marlborough, who built up the British army to become a world-class fighting force in the 1660s, would recognise in the tired heroes of Helmand the descendants of the men he led to victory at Blenheim over three hundred years ago. 'Soldiers' is exhaustively researched, and Holmes's affection for the soldier shines through on every page.

Above all, this book is brimming with great stories, from the chaos of the battlefield to the fug of the barrack-room, from Ulster to Bengal, from Flanders' fields to the Afghan hills.