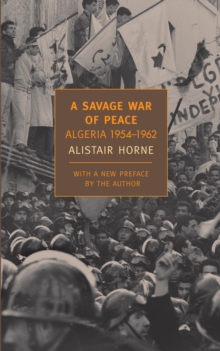 A Savage War Of Peace

The Algerian War lasted from 1954 to 1962. It caused the fall of six French governments, led to the collapse of the Fourth Republic, brought De Gaulle back to power, and came close to provoking a civil war on French soil.

More than a million Muslim Algerians died in the conflict and as many European settlers were driven into exile.

Above all, the war was marked by an unholy marriage of revolutionary terror and state torture.

The conflict made headlines around the world, and at the time it seemed like a French affair.

From the perspective of half a century, however, this brutal and intractable conflict looks less like the last colonial war than the first postmodern one-a full-dress rehearsal for the sort of amorphous struggle that convulsed the Balkans in the 1990s and that now ravages the Middle East, from Beirut to Baghdad, struggles in which religion, nationalism, imperialism, and terrorism assume previously unimagined degrees of intensity. Originally published in 1977, Alistair Horne's A Savage War of Peace was immediately proclaimed by experts of varied political sympathies to be the definitive history of the Algerian War, a book that not only does justice to its Byzantine intricacies, but that does so with intelligence, assurance, and unflagging momentum.

It is not only essential reading for anyone who wishes to investigate this dark stretch of history, but a lasting monument of the historian's art.