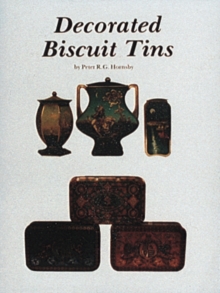 Peter Hornsby's Decorated Biscuit Tins tells the story of a highly successful marketing technique operated in Britain, the United States, and many other parts of the world from the Victorian period up to the second World War.

Biscuit or cookie makers discovered that their products sold better and lasted longer if they were packed in tins.

The first plain, simple containers were replaced by elaborately decorated printed tins, many made to represent a whole range of fascinating domestic and family objects.

These colorful and novel tins helped sell the biscuits and then remained in the home to be used as storage boxes or played with as toys, until they became the source of interest for today.

Thousands of designs were made by the world's leading biscuit makers, and examples can still be discovered in trunks in Grannie's attic, filled with seed packets in the garden shed, on a shelf in the garage, or in any number of antique shops.