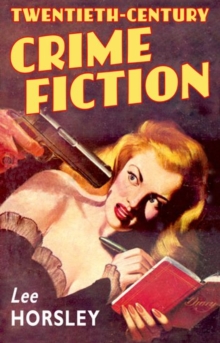 Twentieth-Century Crime Fiction aims to enhance understanding of one of the most popular forms of genre fiction by examining a wide variety of the detective and crime fiction produced in Britain and America during the twentieth century.

It will be of interest to anyone who enjoys reading crime fiction but is specifically designed with the needs of students in mind.

It introduces different theoretical approaches to crime fiction (e.g., formalist, historicist, psychoanalytic, postcolonial, feminist) and will be a useful supplement to a range of crime fiction courses, whether they focus on historical contexts, ideological shifts, the emergence of sub-genres, or the application of critical theories.

In seeking to illuminate the relationship between different phases of generic development Lee Horsley employs an overlapping historical framework, with sections doubling back chronologically in order to explore the extent to which successive transformations have their roots within the earlier phases of crime writing, as well as responding in complex ways to the preoccupations and anxieties of their own eras. The first part of the study considers the nature and evolution of the main sub-genres of crime fiction: the classic and hard-boiled strands of detective fiction, the non-investigative crime novel (centred on transgressors or victims), and the 'mixed' form of the police procedural.

The second half of the study examines the ways in which writers have used crime fiction as a vehicle for socio-political critique.

These chapters consider the evolution of committed, oppositional strategies, tracing the development of politicized detective and crime fiction, from Depression-era protests against economic injustice to more recent decades which have seen writers launching protests against ecological crimes, rampant consumerism, Reaganomics, racism, and sexism.