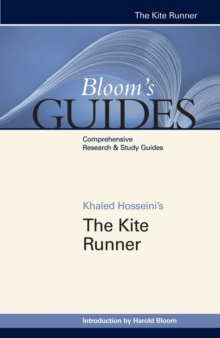 Part of the Bloom's Guides series

In ""The Kite Runner"", history and personal responsibility come together in the story of Amir, an Afghan boy who is haunted by the guilt of betraying his childhood friend Hassan, the son of his father's servant.

In the background loom the many tumultuous changes that have gripped Afghanistan in the years since Amir's carefree kite-flying childhood.

From the fall of the monarchy through the Soviet invasion to the mass exodus of refugees to Pakistan and the United States to the rise of the Taliban regime, the story of Amir and Hassan emerges as the story of Afghanistan itself.

The engaging new guide to this modern-day classic features an annotated bibliography, a listing of other works by the author, and an introduction by noted literary scholar Harold Bloom.