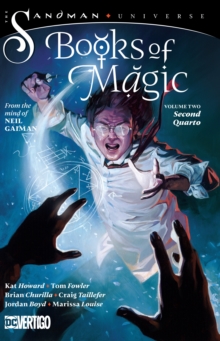 Part of the The books of magic The Sandman Universe ; volume 2 series

Tim has run away to the land of Faerie, and is now forgetting why he fled there in the first place. Magic is so much more fun without consequences or math quizzes getting in the way! But what does Tatiana, the queen of the Faeries, want with Tim, and why is Rose suddenly so much more protective of the boy magician?

The Sandman Universe is a new series of books curated by Neil Gaiman for DC Vertigo. Conjuring epic storytelling and immersing readers in the evolving world of the Dreaming, The Sandman Universe begins anew with four new ongoing series, existing in a shared universe, building upon Gaiman's New York Times best-selling series that lyrically weaved together stories of dreams and magic.

From acclaimed author Kat Howard (Roses and Rot, An Unkindness of Magicians) and artist Tom Fowler (The Unbeatable Squirrel Girl, Hulk: Season One, Rick and Morty) Books of Magic picks up right where Neil Gaiman left off in 1991!