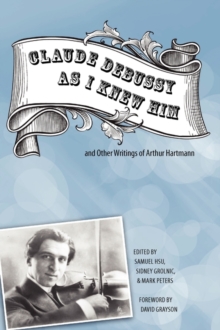 Part of the Eastman Studies in Music series

Arthur Hartmann (1881-1956), a celebrated violinist who performed over a thousand recitals throughout Europe and the United States, met Claude Debussy in 1908, after he had transcribed 'Il pleure dans mon coeur' for violin and piano.

Their relationship developed into friendship, and in February 1914 Debussy accompanied Hartmann in a performance of three of Hartmann's transcriptions of Debussy's works.

The two friends saw each other for the last time on the composer's birthday, 22 August 1914, shortly before Hartmann and his family fled Europe to escape the Great War. With the publication of Hartmann's memoir Claude Debussy As I Knew Him, along with the twenty-two known letters from Claude Debussy and the thirty-nine letters from Emma Debussy to Hartmann and his wife, the richness and importance of their relationship can be appreciated for the first time.

Also included are the facsimile of Debussy's Minstrels manuscript transcription for violin and piano, three previously unpublished letters from Debussy to Pierre Louys, and and correspondence between Hartmann and Bela Bartok, Nina Grieg, Alexandre Guilmant, Charles Martin Loeffler, Marian MacDowell, Hans Richter, and Anton Webern, along with Hartmann's memoirs on Loeffler, Ysaye, Joachim and Grieg. Samuel Hsu is a pianist and professor of music at Philadelphia Biblical University.

Sidney Grolnic, now retired, was a librarian in the music department of the Free Library of Philadelphia, where he served as curator of the Hartmann Collection.