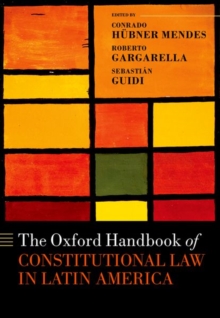 The Oxford handbook of constitutional law in Latin America

No matter how distinctive these histories and transitions might be, there are still commonalities that transcend the mere geographical contiguity of these countries.

This Handbook depicts the constitutional landscape of Latin America by shedding light on its most important differences and affinities, qualities and drawbacks, and by assessing its overall standing in the global enterprise of democratic constitutionalism.

It engages with substantive and methodological conundrums of comparative constitutional law in the region, drawing meaningful comparisons between constitutional traditions.

The volume is divided into two main parts. Part I focuses onexploring the constitutions for seventeen jurisdictions, offering a comprehensive country-by-country critique of the historical foundations, institutional architecture, and rights-based substantive identity of each constitution.