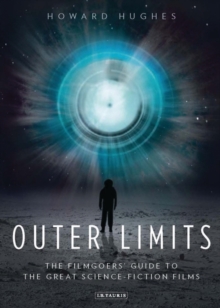 Outer limits : the filmgoers' guide to the great science-fiction films

HOWARD HUGHES'S NEW FILMGOERS' GUIDE TO SCIENCE-FICTION FILMS DELVES DEEP INTO THE LANDMARK MOVIES OF THIS EVERPOPULAR GENRE, FROM METROPOLIS TO AVATAR AND BEYOND, AND COVERS OVER 250 MORE Outer Limits explores science-fiction cinema through 26 great films, from the silent classic Metropolis to today.

It reviews the galaxy of stars and directors who have created some of the most popular films of all time, including George Lucas's 'Star Wars' films, Steven Spielberg's Close Encounters of the Third Kind and Minority Report, James Cameron's 'Terminator' films and Ridley Scott's milestones Alien and Blade Runner.

It also discusses everything from A-listers 2001: A Space Odyssey and Planet of the Apes, to Japanese monster movies, 1950s B-movies, creature features and cult favourites, depicting time travel, distant planets or alien invasions.

Films featured include The War of the Worlds, Independence Day, Tarantula, Godzilla, The Thing, Forbidden Planet, Barbarella, Galaxy Quest, Mad Max 2, Back to the Future, The Man Who Fell to Earth, Star Trek, Apollo 13, Invasion of the Body Snatchers, The Matrix, and many, many more. Illustrated with original posters, Outer Limits is an informative, entertaining tour of the sci-fi universe.