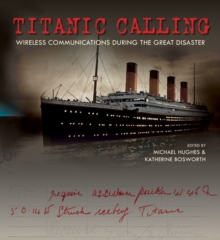 Published to mark the centenary of the sinking, this book tells the story of the Titanic from a new angle: the role of wireless in the disaster. Drawing on the Marconi Archives in the Bodleian Library, the most extensive record of wireless communications, the book recounts the fateful events of April 1912 using complete transcripts of the messages to re-tell this well-known story from a different perspective. The narrative begins with warnings of ice, including one sent from the S.S.

Californian, the closest ship to the Titanic, just hours before the fatal collision.

It follows Jack Phillips, the senior operator on board the R.M.S.

Titanic, as he begins sending the 'CQD' Marconi distress signals late on the night of April 14th.

We see how these urgent calls were received by nearby ships and how news was passed rapidly across the Atlantic, in a desperate attempt to save the lives of the passengers and crew.

The story ends with messages from the few lucky survivors safely on their way to New York. The directness and brevity of the messages gives the narrative a compelling impact and immediacy.

Titanic Calling brings to life the voices of the individuals in this drama, retelling this legendary story as it was first heard.