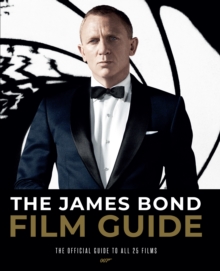 By: Hugo, Simon,  Lawrence, Will

Featuring easy-to-find facts on the characters, the actors, the vehicles, the stunts, the soundtracks and the unforgettable scenes, this authorized guide takes you through six decades of one of the greatest movie franchises ever.

With more than 1,000 production photographs, posters, set designs and behind-the-scenes images from the filmmakers' extensive archive, this book is an indispensable guide to what happened in which film and when, providing all you really want to know on the phenomenal world of Bond.

The James Bond film series is one of the longest continually-running film series in history, having been in on-going production from 1962 to the present. In that time Eon Productions has produced 24 films, with the 25th - "No Time to Die" releasing Spring 2020. With a combined gross of over $7 billion to date, the films produced by Eon constitute the fifth-highest-grossing film series. Six actors have portrayed 007 in the series, the latest being Daniel Craig.