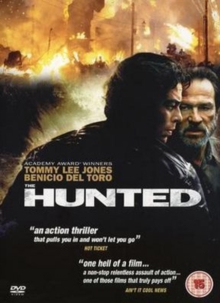 Action thriller by William Friedkin, director of 'The French Connection' and 'The Exorcist'.

Benicio del Toro stars as Aaron Hallam, a trained assassin who, plagued by traumatic flashbacks of death and destruction, has gone AWOL from the Special Forces and is living a feral existence in the forest of Silver Falls, Oregon.

Trained to kill but mentally tortured, he starts brutally killing poachers and deer hunters who stray into the area.

Bonham (Tommy Lee Jones), the man who trained Hallam, for help with the case.

But can he reach his former prize student - and get through to him before he himself becomes 'the hunted'?