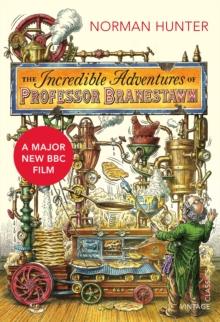 The incredible adventures of Professor Branestawm

Rediscover Professor Branestawm this Christmas - soon to become a brand new drama on BBC ONE written by Charlie Higson and starring Harry Hill'Once you started anything in Professor Branestawm's house you never knew when it might finish or even if it ever would'Poor Mrs Flittersnoop!

It's not easy being Professor Branestawm's housekeeper.

People may say he's a genius, but all his inventions always make life more complicated, alarming and extraordinary than it was before.

An innocent bottle of old cough mixture turns out to be an elixir that makes all the waste paper in the bin come to life, the burglar-catcher and the pancake-maker operate just a little too efficiently, and about the spring-cleaning machine, the less said the better.

You could write a book about it, but nobody would believe it. Includes exclusive material: In the Backstory you can find out about accidental inventions that changed our lives and try a few experiments of your own!

Vintage Children's Classics is a twenty-first century classics list aimed at 8-12 year olds and the adults in their lives.

Discover timeless favourites from The Jungle Book and Alice's Adventures in Wonderland to modern classics such as The Boy in the Striped Pyjamas and The Curious Incident of the Dog in the Night-Time.