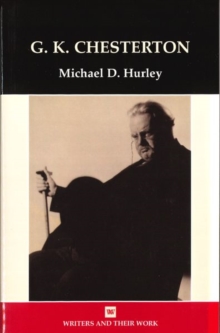 Chesterton was one of the most protean and prolific writers of his age, perhaps of any age.

Bernard Shaw called him a 'colossal genius'. Most readers have certainly found him too big to see whole, and have therefore cut him in half.

The 'poet' is severed from the philosopher; he is treated either as a phrase-maker or as a mystic; his quirky writings are enjoyed as an aesthetic end in themselves, or they are praised for their contribution to theology.

In this close reading of his work, Michael D. Hurley brings Chesterton's divided selves together. Covering the full range of his diverse genres, Hurley shows how Chesterton thinks through language, in ways that confound attempts to read him as a thinker without first appreciating him as a writer.