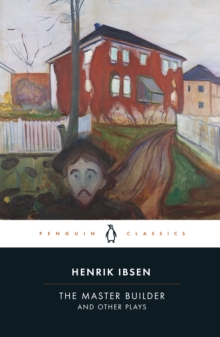 The master builder and other plays

In The Master Builder, a married, middle-aged architect becomes bewitched by a strange young woman who claims to have known him for years.

A sudden death in Little Eyolf is the catalyst that drives a couple into a greater understanding of themselves.

In John Gabriel Borkman, a banker recently released from prison must choose between his wife and her sister, while a sculptor on holiday is reunited with the woman who inspired his greatest art in When We Dead Awaken. The new Penguin series of Ibsen's major plays offer the best available editions in English, under the general editorship of Tore Rem.

All the plays have been freshly translated by leading translators and are based on the definitive Norwegian edition of Ibsen's works.

This volume includes an introduction by Toril Moi on the themes of death and human limitation in the plays, and additional editorial apparatus by Tore Rem. Henrik Ibsen (1828-1906) is often called 'the Father of Modern Drama'.

Born in the small Norwegian town of Skien, he left Norway in 1864 for a twenty-one-year long voluntary exile in Italy and Germany.

After successes with the verse dramas Brand and Peer Gynt, he turned to prose, writing his great twelve-play cycle of society dramas between 1877 and 1899.

This included The Pillars of Society, A Doll's House, Ghosts, An Enemy of the People, The Wild Duck, Rosmersholm, The Lady from the Sea, Hedda Gabler, The Master Builder, Little Eyolf, John Gabriel Borkman, and, finally, When We Dead Awaken.

Ibsen returned to Norway in 1891 and died there at the age of seventy-eight. Barbara J. Haveland and Anne-Marie Stanton-Ife are both freelance literary translators. Toril Moi is Professor of English, Theater Studies and Philosophy at Duke University.

Her books include Henrik Ibsen and the Birth of Modernism (2006). Tore Rem is Professor of British literature at the University of Oslo and author of Henry Gibson/Henrik Ibsen (2006).