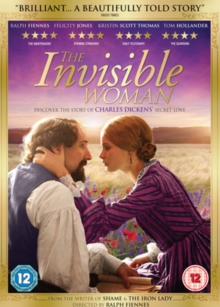 Ralph Fiennes directs and stars in this romantic drama adapted from Clare Tomalin's book about the relationship between celebrated 19th-century novelist Charles Dickens and his mistress.

School teacher Nelly Ternan (Felicity Jones), now a wife and mother, looks back on her life as a young woman when, while working as an actress, she met the 45-year-old Dickens (Fiennes).

Having become disenchanted with his wife Catherine (Joanna Scanlan), Dickens finds himself enamoured by the equally smitten Nelly and the two become romantically involved.

However, they must keep their relationship a secret, meaning Nelly must live an almost invisible existence.