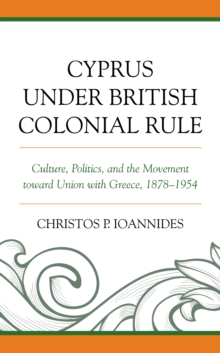 Cyprus under British colonial rule : culture, politics, and the movement toward union with Greece, 1878-1954

This is a unique book that combines a political narrative with poetry to examine the role of culture and the fusion of religion and politics during the struggle against colonialism.

The context is Britain's geopolitical interests in the Middle East.

The author utilizes a vital cultural source echoing the authentic voice of the people, Cypriot folk poems, which has remained virtually unknown to the English reader until now.

Translated into English, they are interwoven into the book's narrative to reflect the yearning for social justice and the political sentiments of the vast majority of the population, the peasants, in a rural society.

The Greek Orthodox Church led the anti-colonial movement revolving around union with Greece.

Through his intimate knowledge of Greek Orthodox practices, the author elucidates how religious customs and rituals were intertwined with the nationalist ideology to lead to political mobilization.

In the process, culture, with its religious underpinnings, shaped politics.

This dynamic has been the case from the Middle East, Turkey and North Africa, to Eurasia and South East Asia.

Prime examples are the Iranian revolution and the more recent Arab Spring, both of which caught the West by surprise.

In Cyprus, the British, with their sense of superiority, remained alien to the local culture and discounted popular sentiment.

The two rebellions that ensued caught Britain totally by surprise.

This is a valuable case study on the convergence of religion and politics.

Academics, students and non-specialists will find a captivating narrative on Britain's colonial encounter in an idyllic but strategic island in the Eastern Mediterranean.