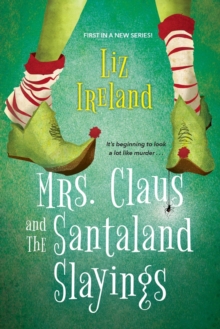 Mrs. Claus and the Santaland Slayings

Love is full of surprisesthough few compare to realizing that you're marrying the real-life Santa. April Claus dearly loves her new husband, Nick, but adjusting to life in the North Pole is not all sugarplums and candy canes. Especially when a cantankerous elf named Giblet Hollyberry is killedfelled by a black widow spider in his stockingshortly after publicly arguing with Nick.

Christmastown is hardly a hotbed of crime, aside from mishaps caused by too much eggnog, but April disagrees with Constable Crinkle's verdict of accidental death. As April sets out to find the culprit, it'll mean putting the future of Christmas on the lineand hoping her own name isn't on a lethal naughty list . . .