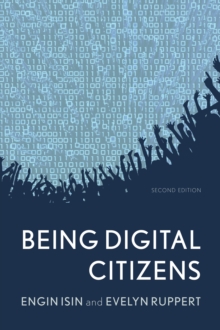 From the rise of cyberbullying and hactivism to the issues surrounding digital privacy rights and freedom of speech, the Internet is changing the ways in which we govern and are governed as citizens.

This book examines how citizens encounter and perform new sorts of rights, duties, opportunities and challenges through the Internet.

By disrupting prevailing understandings of citizenship and cyberspace, the authors highlight the dynamic relationship between these two concepts.

Rather than assuming that these are static or established "facts" of politics and society, the book shows how the challenges and opportunities presented by the Internet inevitably impact upon the action and understanding of political agency.

In doing so, it investigates how we conduct ourselves in cyberspace through digital acts.

This book provides a new theoretical understanding of what it means to be a citizen today for students and scholars across the social sciences.

A Preface consists of reflections on developments in digital politics since the book was published in 2015.

It considers how recent major political struggles over digital technologies and data can be understood in relation to the conceptualization of digital citizens that the book offers.

While the Preface positions dominant responses to these struggles such as government regulations as 'closings', a new final chapter, Digital citizens-yet-to-come offers examples of 'openings' - digital acts such as new forms of data activism that are less recognised but which point to the emergence of paradoxical digital acts that are producing new digital political subjectivities.

An update is needed at this time for two key reasons: Digital technologies--from the devices, platforms, apps and software to the sociotechnical infrastructures that make them up--are dynamic and constantly being innovated.

The new edition addresses what technological developments such as smart watches and driverless car to rapid advances in AI and algorithmic decision-making mean for being a digital citizen.Technological changes have consequences for how subjects can become citizens--from the digital acts that are possible to the invention of new repertoires for acting.