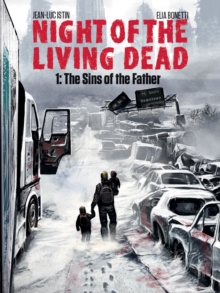 The sins of the father

Part of the Night of the living dead ; volume 1 series

The first part of a chilling rewriting of the infamous cult movie!

It's Halloween. Lizbeth leaves her husband and two children to accompany her brother Leland, the favourite son, to visit the grave of their adoptive parents.

But no sooner do they arrive at the cemetery than they are attacked by a group of living dead!

After a terrifying chase, Lizbeth and Leland find refuge in a squalid hotel that will prove to be the only defence against a horde of zombies hungry for fresh meat.

They are safe, for now. But the real danger is right outside the hotel walls and the invasion is widespread.

Several cities are already devastated. The survivors discover that the hotel manager is holed up in his room, ready to shoot the first person (or thing) that comes too close.

As night begins to fall, they discover another problem.

There is no electricity. Lizbeth has no choice. She decides that someone has to turn on the emergency power system.

But she will have to pass through an area infested with zombies.

Will Lizbeth survive? Will she be reunited with her husband and children? The cult film Night of the Living Dead created the modern zombie myth.Night of the Living Dead, Volume 1: The Sins of the Father is the first of three volumes that retell the classic story for modern readers and fans of graphic novels. Istin's tight text and Bonetti's skilled art bring the terror and horrid fear to life and the convey the psychology of the characters.

Together they resurrect the zombie story for a new generation.