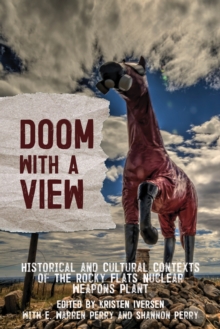 Doom with a View : Historical and Cultural Contexts of the Rocky Flats Nuclear Weapons Plant

Tucked up against the Rocky Mountains, just west of Denver, sits the remnants of one of the most notorious nuclear weapons sites in North America: Rocky Flats.

With a history of environmental catastrophes, political neglect, and community-wide health crises, this site represents both one of the darkest and most controversial chapters in our nation's history, and also a conundrum on repurposing lands once considered lost.

This anthology of essays from fourteen esteemed scientists, medical researchers, philosophers, artists, writers, and activists explains the history and impact of the plant, whose launch coincided with the start of the Cold War, and whose cleanup continues to this day.

As the crush of encroaching residential areas close in on this site, and as the generation of Rocky Flats workers passes on, the memory of Rocky Flats is receding from the public mind.

Yet the need to responsibly manage the site, and understand the consequences of forty years of plutonium production and contamination, must be a part of every decision for the land's future.