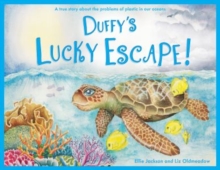 Duffy's Lucky Escape : A True Story About Plastic In Our Oceans

Duffy's Lucky Escape will transport you to a tropical paradise where Duffy the Sea Turtle lives amongst beautiful coral reefs and colourful fish only for Duffy to learn that not all that floats is food.

As time is running out Duffy has a lucky escape when kind people step in to save the day.

Duffy's Lucky Escape is based on true events and it is this powerful message which invites children and adults alike to question the impact of ocean plastic on our environment.

With ideas and activities which reinforce the story this is a book which will inspire children to make changes to the world around them. There is a huge growing national and international consciousness about the dangers of ocean plastic and it is important to teach children about this devastating global issue without overwhelming them or shocking them.

The Wild Tribe Heroes series of books guides young readers through the issues in a gentle and friendly way together with further information to inspire children to make changes to their own and their families lives. Sold over 30,000 books in the series in just 2 years ; No 1 bestselling books ; Personal letters of congratulations from Sir David Attenborough and Prince Charles ; All books are based on true stories which means that children are more connected to the issue. ; Featured in national media - BBC, ITV, Guardian, Huffington Post and Mail on Sunday ; Sold by WH Smiths, Waterstones, National Trust, RNLI, Surfers Against Sewage, #2MinuteBeachClean. ; Stocked by over 250 museums, national libraries, bookshops and gift shops, zero waste and farm shops and major tourist attractions such as The Eden Project and London & Chester Zoos ; Reached over a million children worldwide in schools ; Translated into 15 different languages so far