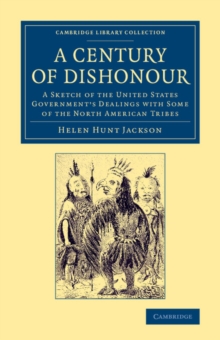 A Century of Dishonour : A Sketch of the United States Government's Dealings with Some of the North American Tribes

Author and activist Helen Hunt Jackson (1830-85) is remembered for her work in support of Native American rights.

She was also a friend and correspondent of the poet Emily Dickinson, and her own verse was praised by Ralph Waldo Emerson.

Jackson's novel emerged out of her passionate seeking of justice for her country's indigenous peoples.

She describes decades of government-sanctioned mistreatment of Native Americans in this 1881 publication.

The work introduces seven major tribes, their claims to ancestral lands, and the history of broken treaties and massacres they had endured.

Alongside this, Jackson also presents details of Native American culture, resilience and creativity.

This remains a vital and substantial account of minority persecution in North American history.