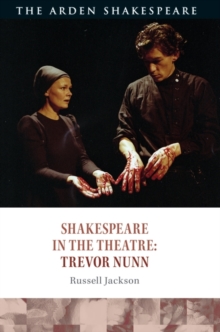 Part of the Shakespeare in the Theatre series

Sir Trevor Nunn is one of the most versatile and accomplished directors in the English-speaking theatre.

This book examines his achievements as a director of Shakespeare within the wider context of debates on the cultural politics of Britain's theatrical institutions in the twentieth and twenty-first centuries.

His approach has been marked by the combination of close textual analysis with inventive theatricality, in performance spaces ranging from the large stages of the Royal Shakespeare Company and the National Theatre to the intimacy of the companies' studio theatres.

The principal focus of the book is on Nunn's work as director of Shakespeare during his artistic directorship of the RSC and the NT.

The study draws on archive material, as well as reviews and other published commentary, including that of actors who have worked with him.