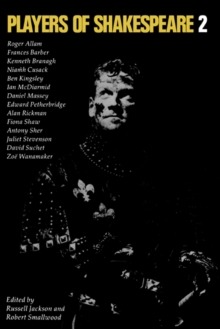 Players of Shakespeare 2 : further essays in Shakespearian performance by players with the Royal Shakespeare Company

Part of the Players of Shakespeare series

This is the second volume of essays by actors with the Royal Shakespeare Company. Fourteen actors describe the Shakespearean roles they played in productions between 1982 and 1987.

Each gives a unique insight into the preparation and performance of a major Shakespearean role and how a character is created through responding to Shakespeare's text, within the context of a particular director's conception and the environment established by the designer.

A brief biographical note is provided for each of the contributors and an introduction places the essays in the context of the Stratford and London stages, and of the music and design for the particular productions.