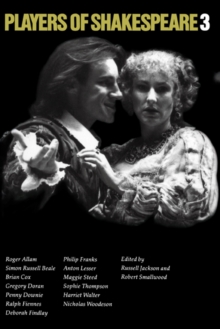 Part of the Players of Shakespeare series

This is the third volume of essays by actors with the Royal Shakespeare Company.

Thirteen actors describe the Shakespearian roles they played in productions between 1987 and 1991.

The plays covered include Hamlet, Richard III, The Merchant of Venice, As You Like It, Much Ado About Nothing, Measure for Measure and important theatrical rarities such as Cymbeline, Titus Andronicus, King John and the Henry VI plays in the Royal Shakespeare Company's highly successful adaptation retitled The Plantagenets.

A brief biographical note is provided for each of the contributors.