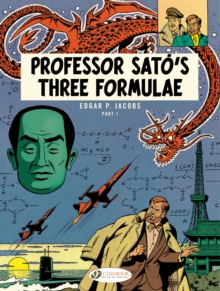 Part of the The Blake & Mortimer series ; vol. 22 series

One evening in Tokyo, air traffic controllers detect an unknown flying object and send two aircraft to intercept and identify it.

However, the fighters last message before they crash into each other is ryu dragon!

The whole business has deeply upset Professor Sato Akira, and he calls upon his friend Mortimer, who can always be counted upon for good advice.

But before he s even received the invitation, Mortimer is already targeted by men hell bent on getting rid of him Captain Francis Blake, dashing head of England s MI5.

The most distinguished duo of gentleman-adventurers, battling the forces of evil and their arch nemesis Olrik around the globe, below the earth, even across time itself...

The 22nd adventure of Her Majesty s finest protectors!