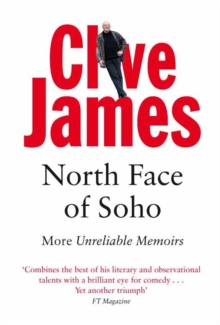 Part of the Unreliable Memoirs series

At the very end of "May Week Was in June", we left our hero sitting beside the River Cam one beautiful 1968 spring day, jotting down his thoughts in a journal.

Newly married and about to leave the cloistered world of Cambridge academia for the racier, glossier life promised by Literary London, he was, so he informed his journal, reasonably satisfied.

But what happened next? This is the question posed (and answered) by "North Face of Soho".

Intelligent, amusing and provocative - the words apply to the man himself as much as his writing - the fourth volume of "Unreliable Memoirs" is every bit as eventful, entertaining, engrossing and honest as the previous three. "In the case of many people who attempt an autobiography even a single volume is one too many, and objectivity about the comic value of their own anecdotes is all but impossible.

In the case of Clive James the four volumes now in existence are too few.

If the final tally puts him up there with Marcel Proust, so much the better" - "FT Magazine". "I look forward to the next six" - Nicholas Shakespeare, "Daily Telegraph".