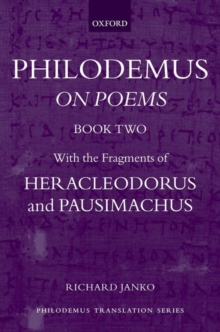 Philodemus: On Poems, Book 2 : With the fragments of Heracleodorus and Pausimachus

The On Poems by Philodemus of Gadara (c.110-35 BC), the Epicurean philosopher and poet who taught Vergil and influenced Horace, is our main source for Hellenistic literary and critical theory, bridging the gap between Aristotle and Horace.

In Book 2 Philodemus rebuts two almost unknown critics, Heracleodorus and Pausimachus, who argued, respectively, that the sound arising from the word-order (synthesis) is the source of poetic excellence,regardless of the content and word-choice, and that the pure sound of the vowels and consonants, which vary in quality, is that source.

By putting together fragments from both the summary and the rebuttal of these theorists, we can form a full picture of their thought. Philodemus led the Augustan reaction against this invasion of literary criticism by musical theory, arguing that form and content are interrelated, and that well-expressed content, not pretty sound, is what makes poetry worthwhile.

Book 2 reveals just how much and how inventively Horace drew on the ideas of all three writers in composing his Ars Poetica. The extensive remains of this scroll, carbonized in the eruption of Vesuvius, were thoroughly jumbled after their rediscovery in the Villa of the Papyri at Herculaneum.

This edition painstakingly reconstructs their original sequence according to new methods, while exploiting previously unknown manuscript sources and technologies for ordering and reading the extant pieces.

In thus restoring this lengthy aesthetic treatise from antiquity, it makes another major addition to the corpus of classicalliterature.