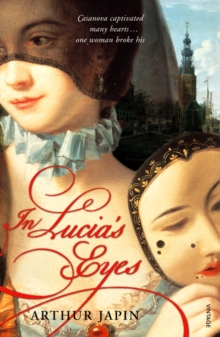 In Amsterdam, in 1758, a man is artfully seducing a woman.

He is, to all appearances, Monsieur le Chevalier de Seingalt, she is a courtesan, well-known in Amsterdam for the fact that she never removes her veil.

He sets her a challenge: if she can find a woman who has suffered after falling in love with him, she is entitled to resist his charms; if not, she should play his game.

What Seingalt doesn't know is that he has already met the veiled woman many years ago, in another life.

What Lucia doesn't know is that Seingalt will go down in history as one of the world's greatest lovers, Casanova.

A deliciously entertaining and moving story of innocence and experience, love and sacrifice, "In Lucia's Eyes" takes the reader on an entrancing journey from the canals of Amsterdam to those of Venice, painting a glorious portrait of the eighteenth century.