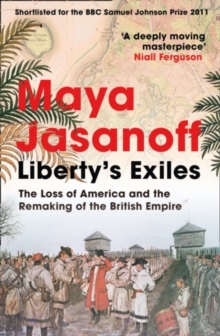 Liberty's exiles : the loss of America and the remaking of the British Empire

'More than just a work of first-class scholarship, Liberty's Exiles is a deeply moving masterpiece that fulfils the historian's most challenging ambition: to revivify past experience.' Niall Ferguson Liberty's Exiles was shortlisted for the 2011 BBC Samuel Johnson Prize. Early in the afternoon of 25 November 1783, the American Revolution was finally over; the British were gone, the patriots were back and a key moment inscribed itself in the annals of the emerging United States.

Territorial independence from Great Britain had effectively begun. In 'Liberty's Exiles', Maya Jasanoff examines the realities of the end of the Revolution, through looking at the lives of the Loyalist refugees - those men and women who took Britain's side.

She tells the story of Elizabeth Johnston from Savannah, whose family went on to settle in St Augustine, Scotland, Jamaica and Nova Scotia; Reverend Jacob Bailey, who fled from New England across rough seas to Canada with his family and little more than the clothes on his back; five-year-old Catherine Skinner - the daughter of a loyalist - who was trapped as a prisoner in her home, hiding from the gunshots of rebel raiders.

Their experiences speak eloquently of a larger history of exile, mobility and the shaping of the British Empire in the wake of the American War. Beautifully written and rich with source material, 'Liberty's Exiles' is a history of the American Revolution unlike any before.