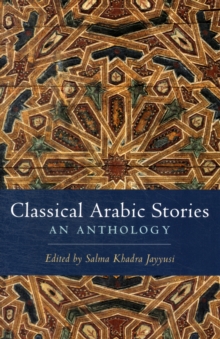 Short fiction was an immensely innovative art in the medieval Arab world, providing the perfect vehicle for transmitting dazzling images of life and experiences as early as pre-Islamic times.

These works also speak to the urbanization of the Arab domain after Islam, mirroring the bustling life of the Muslim Arabs and Islamized Persians and reflecting the sure stamp of an urbanity that had settled very staunchly after big conquests.

All the noises and voices of the Umayyads and Abbasids are here.

One can taste the flavor of Abbasid food, witness the rise of slave girls and singers, and experience the pride of state.

Reading these texts today illuminates the wide spectrum of early Arab life and suggests the influences and innovations that flourished so vibrantly in medieval Arab society. The only resource of its kind, Salma Khadra Jayyusi's Classical Arabic Stories selects from an impressive corpus, including excerpts from seven seminal works: Ibn Tufail's novel, Hayy ibn Yaqzan; Kalila wa Dimna by Ibn al-Muqaffa; The Misers by al-Jahiz; The Brethren of Purity's The Protest of Animals Against Man; Al-Maqamat (The Assemblies) by al-Hamadhani and al-Hariri; Epistle of Forgiveness by al-Ma'arri; and the epic romance, Sayf Bin Dhi Yazan.

Jayyusi organizes her anthology thematically, beginning with a presentation of pre-Islamic tales, stories of rulers and other notables, and thrilling narratives of danger and warfare.

She follows with tales of love, religion, comedy, and the strange and the supernatural.

Long assumed to be the lesser achievement when compared to Arabic literature's most celebrated genre-poetry-classical Arabic fiction, under Jayyusi's careful eye, finally receives a proper debut in English, demonstrating its unparalleled contribution to the evolution of medieval literature and its sophisticated representation of Arabic culture and life.