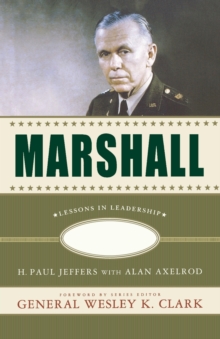 Part of the Great Generals series

General George C. Marshall was a skillful and compassionate leader with a unique legacy.

He never fired a shot during WWII and led no troops into battle - his brilliance was purely strategic and diplomatic, and incredibly effective.

He was responsible for the building, supplying, and, in part, the deployment of over eight million soldiers. In 1947, as Secretary of State, he created the Marshall Plan, a sweeping economic recovery effort that pulled the war-shattered European nations out of ruin, and gave impetus to NATO and the European Common Market.

It was for the Marshall Plan that he won the Nobel Peace Prize - the only time in history a military commander has ever been awarded this honor.

Marshall's skilled combination of military strategy and politics, emphasis on planning as well as execution, and his expertise in nation-building holds lessons for military and civilian leaders today.