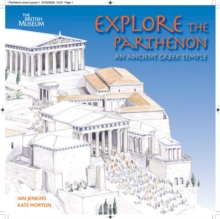 Explore the Parthenon : an ancient Greek temple and its sculptures

The Parthenon in Athens is the most famous Greek temple in the world and an icon of Ancient Greek art.

It was built to house a colossal statue of the goddess Athena, and the temple itself was decorated with sculptures and reliefs of the most magnificent quality.

These sculptures are now on display in London and Athens, and are admired by thousands of visitors each year.

This book explores in detail these lovely carvings, with the aid of new detailed digital photography.

Who are the people, animals, and gods and goddesses shown on the frieze and what are they doing?

Why were they shown on a temple? How were the sculptures made, and how did the carvers give such an amazing illusion of ranks of horsemen, chariots and people in carvings only a few centimetres deep?

Ian Jenkins, a world expert on Ancient Greek sculpture, describes and explains these wonderful sculptures in a vivid and simple way for children, and puts them in the context of Ancient Greek religion, life and art. Children will enjoy discovering the wonders of the Parthenon sculptures for themselves but in the process they will also gain a much greater understanding of the people who created the Parthenon and of the world of classical Athens.