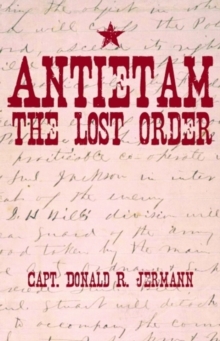 Under an unfortunate set of circumstances on September 13, 1862, the Confederates lost and the Union recovered a copy of Confederate battle plan Special Order 191.

If I cant beat Bobby Lee with this piece of paper, I will be willing to go home, said Union army leader George B.

McClellan upon reading the document. Antietam: The Lost Order covers the hours between the time McClellan read Lees plan and Lees army reunited.

Thirty-seven maps display the tactics employed as the clock ticked from September 9 to September 19, including Harpers Ferry defenses, McLaws Brigade deployments, relief routes for Harpers Ferry, the Battle of Maryland Heights, and other significant plans and battles.

Antietam: The Lost Order explains why Harpers Ferry was key to the Union victory in September 1862, the importance of the location and timing of the Battle of Antietam, and how its outcome influenced the future of our country.

The book concludes by analyzing what went wrong on the Union side, the lasting impact of finding the lost order, and finally, the fates of the major players. With as much emphasis given to human foibles as to troop movements, this book will appeal to a wide audience beyond Civil War devotees.