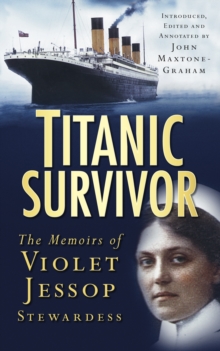 'I did not like big ships...I was secretly afraid' admits Violet Jessop in this unique eyewitness account of the most written about disaster of the twentieth century.

Joining the Royal Mail Line in 1908 at the age of twenty-one, Violet Jessop spent her entire career at sea, travelling on more than 200 voyages.

She was a stewardess for first-class passengers on the Titanic when it sank on its maiden voyage in April 1912 after hitting an iceberg.

Her description of the sinking is chilling as she sees to the needs of the passengers before finding a warm coat for herself.

While in the lifeboat, someone threw her a 'forgotten baby', and she watched, fascinated as the ship went down 'as if by looking I could keep her afloat'.

Four years later, she was a wartime nurse aboard the hospital ship, Britannic, when it struck a mine and sank to the bottom of the Aegean.

These memoirs give us a unique glimpse of life below decks aboard one of the great ocean liners. From Jessop's unusual vantage point, we learn what life was like for those who worked on the ships: hilarious fellow stewardesses, cramped quarters, wartime alerts, impossible passengers ('the haughty, gimlet eyes of a certain well-known society woman'), philandering shipmates, exotic ports, unrequited love and tragic deaths.