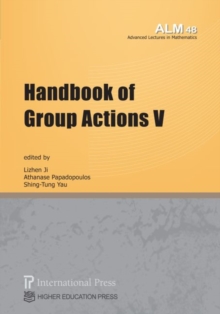 Part of the Advanced Lectures in Mathematics, Vol. 48 series

Groups are fundamental objects in mathematics, as they are responsible for the symmetries of any object or system under consideration.

The presence of symmetry makes a problem more interesting and, as a general rule, easier to solve.

In all cases, it is group action which makes groups useful and important.

This is not surprising, since the notion of group was first introduced through group actions as permutation groups on roots of algebraic equations.

On the other hand, the single notion of group action includes many different actions arising from various sources. All of which is amply illustrated by the papers collected in this volume, the fifth Handbook of Group Actions.