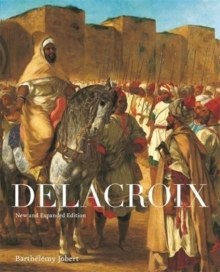 A newly expanded edition of the defining book on one of French Romanticism's most influential and elusive paintersEugene Delacroix (1798-1863) was a solitary genius who produced stormy Romantic works like The Death of Sardanapalus as well as more classically inspired paintings such as Liberty Leading the People.

Over the long span of his career, he responded to the literary fascination with Orientalism, the politics of French imperialism, and the popular interest in travel, painting everything from sweeping, epic tales to intimate interiors.

In this beautifully illustrated book, Barthelemy Jobert delves into all facets of Delacroix's life and art, providing an unforgettable portrait of perhaps the greatest and most elusive painter of the French Romantic movement. Bringing together large canvases, decorative cycles, watercolors, and engravings, Jobert explores the inner tensions and contradictions that drove the artist, re-creating the political and cultural arenas in which Delacroix thrived and enabling readers to fully appreciate the extraordinary range of his artistic production.

He reveals how Delacroix successfully navigated the Salons of Paris and the halls of government, socialized with George Sand and Victor Hugo, engaged in intense philosophical discussions about art with Baudelaire, and maintained a lively repartee with the press.

He vividly describes Delacroix's journey to Morocco, which unexpectedly led him to rediscover his classical roots, and shows how Delacroix profoundly influenced later painters such as Cezanne and Picasso. This new and expanded edition of Jobert's acclaimed book includes a thoroughly updated introduction and conclusion, and a wealth of new information and illustrations throughout.