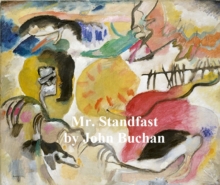 According to Wikipedia, &quoteMr Standfast is the third of five Richard Hannay novels by John Buchan, first published in 1919.

It is one of two Hannay novels set during the First World War, the other being Greenmantle (1916); Hannay's first and best-known adventure, The Thirty-Nine Steps (1915), is set in the period immediately before the war started.

The title refers to a character in John Bunyan's Pilgrim's Progress, to which there are many other references in the novel; Hannay uses a copy of Pilgrim's Progress to decipher coded messages from his contacts, and letters from his friend Peter Pienaar.

Buchan's most famous of his books were the spy thrillers (including) The 39 Steps (which was converted to a play as well as an Alfred Hitchcock movie starring Robert Donat as Richard Hannay, though with Buchan's story much altered.) The &quotelast Buchan&quote (as Graham Greene entitled his appreciative review) was the 1941 novel Sick Heart River (American title: Mountain Meadow), in which a dying protagonist confronts in the Canadian wilderness the questions of the meaning of life.

The insightful quotation &quoteIt's a great life, if you don't weaken&quote is famously attributed to Buchan, as is &quoteNo great cause is ever lost or won, The battle must always be renewed, And the creed must always be restated.&quote