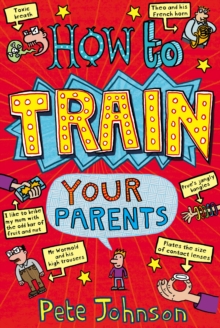 How to train your parents

How to train your parents

Moving to a new area, Louis is horrified to discover his parents becoming ultra-competitive, wanting him and his younger brother to get straight As at school and join all sorts of after-school clubs like the other kids.

Then Louis meets Maddy, who claims to have trained her parents to ignore her.

Louis can't handle it any more. His new school is Swotsville and his mum and dad have fallen into some very bad ways.

All they seem to care about now is how well he's doing at school (answer: not well) and what after-school clubs he wants to join (answer: none!).

They're no longer interested in his jokes (his dream is to be a comedian) and have even nicked the telly out of his bedroom!

What's going on? And can new friend Maddy help? For Maddy tells him her parents used to behave equally badly until she trained them.

All parents have to be trained - and she knows a foolproof way...