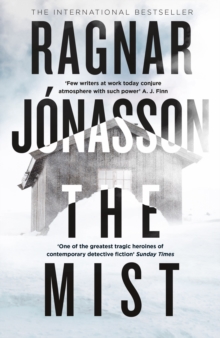 By: Jonasson, Ragnar,  Cribb, Victoria(Translated by)

Part of the Hidden Iceland series

The final nail-biting instalment in the critically acclaimed Hidden Iceland series - FROM THE MILLION COPY BESTSELLING AUTHOR'A world-class crime writer . . . One of the most astonishing plots of modern crime fiction' Sunday Times 'It is nothing less than a landmark in modern crime fiction' The Times 1987.

An isolated farm house in the east of Iceland. The snowstorm should have shut everybody out. But it didn't. The couple should never have let him in. But they did. An unexpected guest, a liar, a killer. Not all will survive the night. And Detective Hulda will be haunted forever . . . Winner of the Capital Crime Reader Award for Mystery Book of the Year. 'This is Icelandic noir of the highest order, with Jonasson's atmospheric sense of place, and his heroine's unerring humanity shining from every page' Daily Mail 'Triumphant conclusion.

First rate and highly recommended' Lee Child 'Chilling - a must-read' Peter James'A modern take on an Agatha Christie-style mystery, as twisty as any slalom' Ian Rankin 'Page-turning stuff with an unexpected ending!' James Swallow'Was gripped from the start of this brilliantly told story. And left wide-eyed with shock at the ending' Fiona Barton'A true masterpiece . . . a plot full of twists and turns and an ending that leaves you gasping for air' Yrsa Sigurdardottir