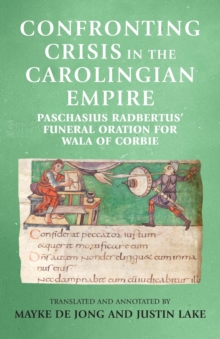 This book presents a new and accessible translation of a well-known yet enigmatic text: the 'Epitaph for Arsenius' by the monk and scholar Paschasius Radbertus (Radbert) of Corbie.

This monastic dialogue, with the author in the role of narrator, plunges the reader directly into the turmoil of ninth-century religion and politics. 'Arsenius' was the nickname of Wala, a member of the Carolingian family who in the 830s became involved in the rebellions against Louis the Pious. Exiled from the court, Wala/Arsenius died in Italy in 836.

Casting both Wala and himself in the role of the prophet Jeremiah, Radbert chose the medium of the epitaph (funeral oration) to deliver a polemical attack, not just on Wala's enemies, but also on his own. -- .