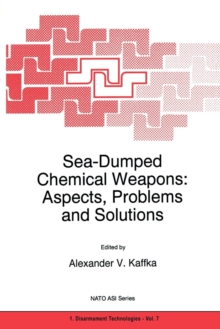 The conference was sponsored by the NATO Division of Scientific and Environmental Affairs in the framework of its outreach programme to develop co-operation between NATO member countries and the Cooperation Partner countries in the area of disarmament technologies.

The problem of the ecological threat posed by chemical weapons (CW) dumped in the seas after the Second World War deserves considerable international attention: the amount of these weapons, many of them having been captured from the German Army, is assessed at more than three times as much as the total chemical arsenals reported by the United States and Russia.

They were disposed of in the shallow depths of North European seas - areas of active fishing - in close proximity to densely populated coastlines, with no consideration of the long-term consequences.

The highly toxic material have time and again showed up, for instance when retrieved occasionally in the fishing nets, attracting local media coverage only.

Nevertheless, this issue has not yet been given adequate and comprehensive scientific analysis, the sea-disposed munitions are not covered by either the Chemical Weapons Convention or other arms control treaties.

In fact, the problem has been neglected for a long time on the international level.

Only recently were official data made available by the countries which admitted conducting dumping operations.