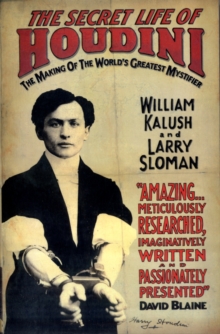 The secret life of Houdini : the making of America's first superhero

Using exclusive access to newly uncovered archives, Kalush and Sloman reveal the clandestine agreements in which the British and Americans recruited Houdini to be an active secret agent.

In exchange for his cooperation, the governments of these two countries facilitated his rise to the top of the world stage.

The authors give thrilling accounts of his assignments, such as his participation in early aerial surveillance and his use of his own magic magazine to communicate espionage-related information.

After the war, Houdini embarked upon what became his most dangerous mission when he took on the Spiritualist movement.

Convinced that Spiritualist mediums were frauds, he became obsessed with exposing them.

But the Spiritualists were a powerful adversary. An organized network of fanatics, led by Sherlock Holmes creator Arthur Conan Doyle, worked relentlessly to orchestrate a campaign that would silence Houdini forever.

Grounded in solid research, but as exciting and dramatic as a good thriller, THE SECRET LIFE OF HOUDINI traces the magician's long and circuitous route from struggling vaudevillian to worldwide legend.