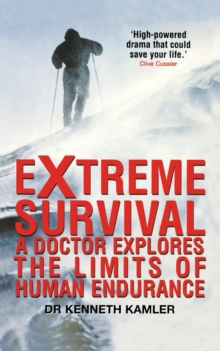 Extreme survival : a doctor explores the limits of human endurance

'If the chanting stops, he will die. My patient will die. I was certain of this-as certain as someone crouching in an unheated tent sitting on the highest mountain in the world can feel about anything...' Ken Kamler (author of Doctor on Everest, doctor, VP of the Explorer's Club, NASA consultant) knows what happens when bodies are pushed to their limits.

He has been to and studied the world's most inhospitable regions, and seen who survived and who didn't.

Telling the stories of his own and others' extraordinary brushes with death, he explores the body's reactions to heat, cold, pressure, starvation, exhaustion, and exposure, and reveals its miraculous survival strategies.

A scientific nail-biter that takes readers where no reality television show would dare go, and proves what survival really means.