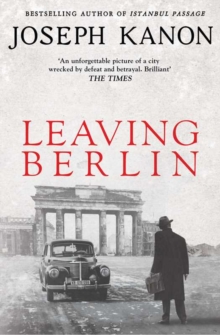 * Don't miss THE ACCOMPLICE, the next heart-pounding and intelligent espionage novel from 'master of the genre' (The Washington Post), Joseph Kanon * 'Up there with the very best . . . Kanon writes beautifully, superbly . . . He is the master of the shadows of the era' The Times From the author of The Good German (made into a film starring George Clooney), Leaving Berlin is a sweeping post-war story and an international bestseller. Berlin is still in ruins almost four years after the war, caught between political idealism and the harsh realities of Soviet occupation.

Alex Meier is a young Jewish writer who fled the Nazis for America before the war.

Now, the politics of his youth have left him embroiled in the McCarthy witch-hunts.

Faced with deportation and the loss of his family, Alex makes a desperate bargain with the fledgling CIA: he will earn his way back to America by acting as their agent in his native Berlin. But almost from the start things go fatally wrong.

Espionage, like the black market, is still a way of life. Praise for Leaving Berlin: 'An unforgettable picture of a city wrecked by defeat and betrayal.

Brilliant' The Times 'Leaving Berlin is hauntingly and beautifully written.

You're going to love it . . . Falling into the book is like falling into a vice; it grips you, pitilessly, until the last page' Richard & Judy Book Club 'Hugely exciting' Daily Telegraph 'One of the most exciting books I've read in years' Alexander McCall Smith, author of The No. 1 Ladies' Detective Agency series 'Brings the hardships and moral decay of post-war Berlin to life in glorious detail' Daily Express