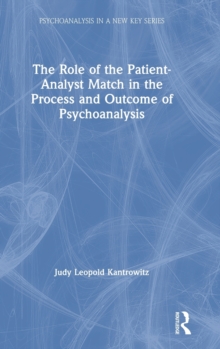 Part of the Psychoanalysis in a New Key Book Series series

The match between patient and analyst places attention on the dynamic effect of interactions of character and conflict of both participants on the process that evolves between them-a spectrum of compatibility and incompatibility that is relevant to the analytic work.

Classical psychoanalysis had been viewed as a "one-person" enterprise, with one analyst interchangeable with another.

Analysts' experiences of countertransference reactions were viewed as unresolved conflicts, reasons to return to personal treatment, not inevitable and potentially informative about the current analytic work.

This view began to shift in the 1980s, with Judy Kantrowitz's work contributing to the development of the recognition that psychoanalysis was a "two-person" process.

In this collection of her most significant papers, Kantrowitz explores the importance of the match, which refers to observable styles, attitudes and personal characteristics that may be rooted in residual and unanalyzed conflicts, triggered in any patient-analyst pair.

Match is neither a predictive nor static concept. Rather it refers to the unfolding transaction that itself that may shift and change during the course of analytic work.

Pulling together the history of the shift in theory from the one-person to two-person understanding of the psychoanalytic enterprise, The Role of the Patient-Analyst Match in the Process and Outcome of Psychoanalysis will be of great interest to contemporary psychoanalysts.