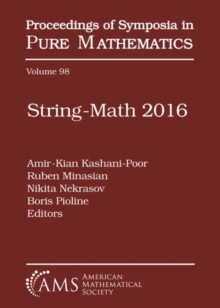 Part of the Proceedings of Symposia in Pure Mathematics series

This volume contains the proceedings of the conference String-Math 2016, which was held from June 27-July 2, 2016, at College de France, Paris, France.

String-Math is an annual conference covering the most significant progress at the interface of string theory and mathematics.

The two fields have had a very fruitful dialogue over the last thirty years, with string theory contributing key ideas which have opened entirely new areas of mathematics and modern mathematics providing powerful concepts and tools to deal with the intricacies of string and quantum field theory.

The papers in this volume cover topics ranging from supersymmetric quantum field theories, topological strings, and conformal nets to moduli spaces of curves, representations, instantons, and harmonic maps, with applications to spectral theory and to the geometric Langlands program.