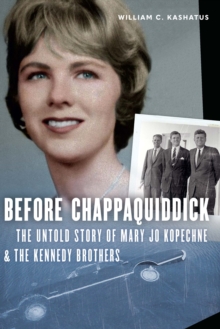 Before Chappaquiddick : The Untold Story of Mary Jo Kopechne

Before Chappaquiddick is a biography of Mary Jo Kopechne, a twenty-eight-year-old secretary who worked on the senatorial staff of Robert F.

Kennedy and his 1968 presidential campaign. She was killed on July 18, 1969, when a car driven by Senator Edward M. Based on interviews with family, friends, and colleagues who worked with her on RFK's senatorial staff from 1965 to 1968 and recently released FBI documents, the biography explores the life and death of a devoted Kennedy staffer during a transformative period in modern American history.

Kennedy plunged off a bridge into a tidal basin on Chappaquiddick Island, off the coast of Cape Cod, Massachusetts. Caught between the silent generation of the 1950s and the politically active generation of the 1960s, Kopechne belonged to an exclusive group of females who worked on Capitol Hill and committed themselves unconditionally to the Kennedy brothers and their noble vision for a better, more humane nation.

She was both a participant in and product of that vision.

In the process, Kopechne came to embody the very best ideals of the sixties: compassion for the underprivileged, social idealism tempered by political realism, and a fierce devotion to just causes.

Chappaquiddick is addressed at length because it brought Kopechne into the national spotlight; the narrative adheres to Senator Edward Kennedy's account of the accident but also highlights the inconsistencies of his account as well as the many questions that remain unanswered fifty years later.