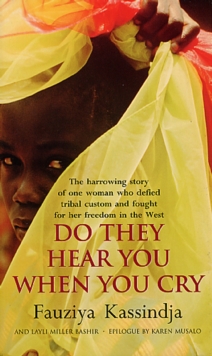 Do They Hear You When You Cry

Like the bestsellers Princess and Not Without My Daughter, Do They Hear You When You Cry? tells the dramatic, compulsively readable story of a woman fighting to free herself from the injustices of her culture. Fauziya Kassindja's harrowing story begins in Togo, Africa, where she enjoyed a sheltered childhood, shielded by her progressive father from the tribal practice of polygamy and genital mutilation. But when her father died in 1993, Fauziya's life changed dramatically. At the age of seventeen, she was forced to marry a man she barely knew who already had three wives, and prepare for the tribal ritual practice of genital mutilation - a practice that is performed without painkillers or antibiotics. But hours before the ritual was to take place, Fauziya's sister helped her escape to Germany, and from there she travelled to the United States seeking asylum - and freedom. Instead she was stripped, shackled and imprisoned for sixteen months by the Immigration and Naturalization Service. Enter Layli Miller Bashir, a twenty-three-year-old law student who took on Fauziya's case. When the two women met, Layli found a broken, emaciated girl with whom she forged an extraordinary friendship. Putting her heart into Fauziya's case, Layli enlisted help from the American University International Human Rights Clinic. The clinic's acting director Karen Musalo, an expert in refugee law, assembled a team to fight on Fauziya's behalf. Ultimately, in a landmark decision that has given hope to many seeking asylum on the grounds of gender-based persecution, Fauziya was granted asylum on 13 June 1996. Here, for the first time, is Fauziya's dramatic personal story, told in her own words, vividly detailing her life as a young woman in Togo and her nightmarish day-to-day existence in American prisons. It is a story of faith and freedom, courage and inspiration - one that you will not easily forget.